Tom Chentnik is a 1992 Magna Cum Laude graduate of Arkansas Tech University.  He is currently the band director at Mountain Home High School, returning to his alma mater in 2002, after teaching ten years in Texarkana and Russellville. Professional affiliations include Arkansas Bandmasters Association, Arkansas School Band and Orchestra Association, and Phi Beta Mu, where he currently serves as chapter president.  He is also the Communication, Arts & Business Academy Leader at Mountain Home High School, and has had the opportunity to present workshops at the National Career Academy Coalition conferences in Washington D.C., Louisville, KY, and Tampa, FL. His bands consistently receive superior ratings on the marching field and concert stage and the MHHS Band marched in the 80th Macy’s® Thanksgiving Day Parade in 2006.  Mr. Chentnik is a National Board Certified Teacher.  His wife, Jill, is also a director in Mountain Home, and they have one daughter, Lauren. 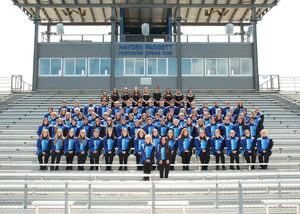