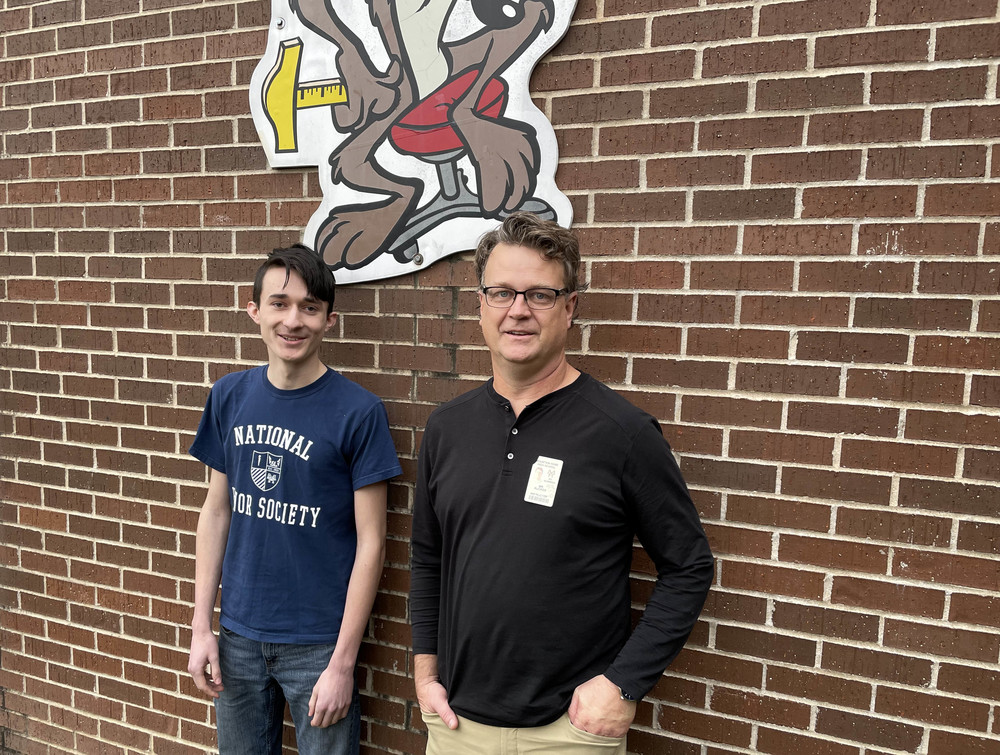 MOUNTAIN HOME, Ark. -- Mitch Huskey, athletic director at Mountain Home Public Schools, ran into a problem in December that he couldn’t seem to solve. “Our varsity football team is moving into a new conference next year: 6A West,” he said. “Each year, all the athletic directors from the conference get together to try to propose a football schedule for the upcoming season that has every team playing one another and allows each team to alternate home and away games.”

Huskey said creating this schedule is always a challenge, but it was made particularly difficult this year, because there are nine teams – an odd number – in this conference. Huskey, who once taught mathematics, felt like he could formulate a schedule that worked, but after getting to week six of the schedule, the whole thing fell apart. “I couldn’t get past week six, so I reached out to Garrett [Rucker], because he teaches advanced math, and I figured he could make it work.”

Rucker worked through the problem himself, and he was also stumped. After asking a couple colleagues who also couldn’t make headway, he had an idea. A bright student of his, Emmanuel Westra, was always looking for extra work during his AP Calculus AB class, so maybe he would want to take on this challenge. “I just went over and posed the problem to Emmanuel, just seeing if it was something he could come up with or what he could do.” Rucker said. “At that time I still thought that maybe it couldn’t be done. It just seemed like there were too many variables, and I shouldn’t think that way anymore, because we have people like him who can do these things.”

Westra went home after school that day and got to work.  He said he noticed that to alternate home and away, whatever solution there was would involve working through rounds. From there, he said he broke it down and began working with a smaller number of teams and working his way up. “Eventually I saw how to solve it, and that was just after supper,” he said.

A problem that college-educated, math-savvy adults took hours working on and still came up empty handed had been solved by a 16-year-old high school student in just a few hours over a bowl of soup.

Westra and his family moved to Mountain Home from Colorado when he was a freshman in high school. At his previous middle school, he began taking computer science courses, and he continued computer science studies when he got to Mountain Home. Rucker said that after school started last year, the high school’s two computer science teachers J.R. Bergenstock and Bradford Young paid him a visit and told him Westra loved math but felt bored in Algebra II. “So we went through the appropriate steps and channels to get that accelerated paperwork done, and today we have Emmanuel as a junior in AP Cal,” Rucker said.

Westra’s computer science background led him to develop a program that would do the work of matching up teams for scheduling so that others would not have to sit for hours trying to solve this problem in the future. “I wrote it in Python,” he said. “Once I figured out how it worked, I turned it into code so that random solutions could be generated, because there are many solutions.”

Rucker took the schedule Westra had created to Huskey who took it to the 6A-West athletic directors’ meeting about a week later. “Before the meeting, everyone sent their proposed schedules,” he said. “Normally it takes two-plus hours for all the athletic directors to decide what they think is best as far as the conference schedule goes, but when I showed up, no one even talked about other schedule proposals. They just went straight to ours because it was obviously the best, so a two-hour meeting became about a 10-minute meeting. We came in, we drew numbers, and that’s where we fell, and then it was over.”

Huskey gave Westra the recognition he deserved during the meeting. “I intended to go in and take all the credit, but I know all those Athletic Directors quite well, and they knew I wasn’t smart enough to figure this out,” he said. “In all seriousness, I think most assumed I had asked a teacher for help, but they were all really impressed to hear it was a student who solved this problem.”

Moving forward, Westra wants the opportunity to solve more problems like this one. “I just liked that this problem was unique and unusual and required a creative solution,” he said. “It just wasn’t just a normal problem.”

Westra said he plans to sit for both the AP Calculus AB exam and the AP Calculus BC exam. He has been prepping independently for the latter exam. He is working with some trusted adults on copyrighting the program he developed as well as working to encrypt the program to protect it. “I am kind of thinking we could make a whole set of software for other people to use when scheduling,” he said.

After high school, Westra has big plans. “I hope to attend a top university,” he said. “I will probably major in math and maybe become a mathematician or a math professor.”

In the meantime, Westra has requested more problems to solve like the one Rucker posed to him. Rucker said he has one important question for Westra at this moment: Will he attend his first football game next season to see his work in person? Westra said he believes he will.